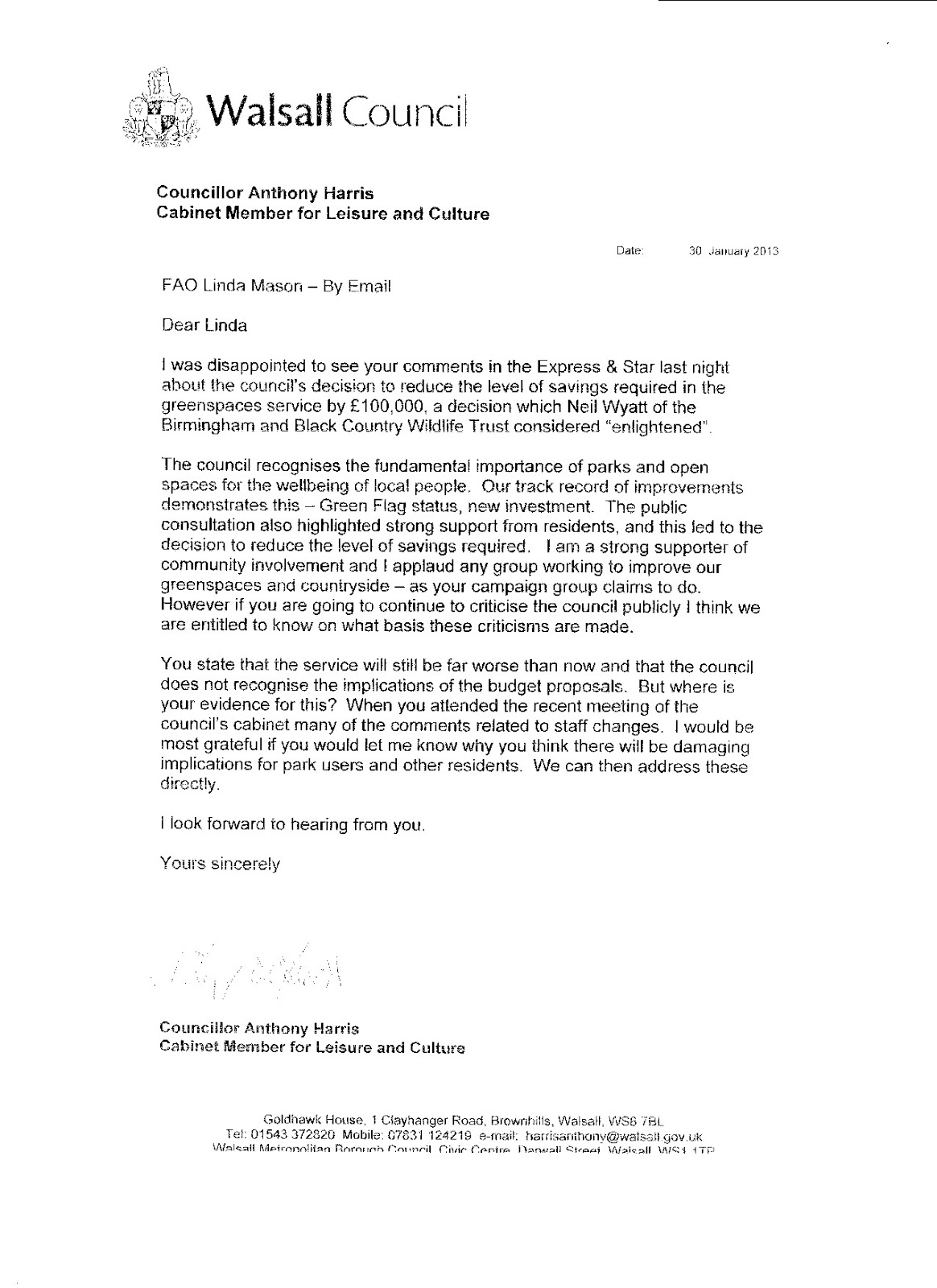 Those of you that check out the Facebook page for this campaign will know that last week I received a letter from Councillor Harris who is the Cabinet Member for Leisure and Culture in Walsall.

The letter is reproduced aside. (If you click on the image it will open in a larger format.)

My response to this email has been sent today and is reproduced below. I don't think I need to say anything more.

With reference to your email dated 30 January 2013, I was disappointed with its contents on two levels.

Firstly, when I attended Cabinet on 12 December a promise was made to me in front of Cabinet that there would be a full response to my presentation, the ideas put forward on behalf of the Campaign and that ‘someone would get back to me’. Your email is not the response I was expecting. Nobody from the council either Officer or Councillor has even bothered to pick up a telephone and let me know the results of cabinet considerations and whether any of the ideas and opinions laid before Cabinet have been taken into account.

Secondly I am quite frankly shocked that you appear to oppose freedom of expression. As a UK citizen and resident of the Borough of Walsall I was unaware that if I voice my considered opinion I have to first give account to the local council!

Since receiving your email I have now been able to gain access to the article in the Express and Star and I have not been misquoted. However when speaking to the reporter I actually said an awful lot more, giving reasons for my criticism of the council. These comments were not printed. Perhaps you should take this up with the Express and Star rather than send me what I can only consider an attempt to bully me by email?

My opinions and criticism of the council and its decisions regarding Green Spaces are published in full and are extremely easy to find. I refer you to the campaign’s blog here http://savewalsallsgreenspaces.blogspot.co.uk/ and urge you to read in full why I think that the council’s decision to reduce Green Spaces budget by £300K is not enlightened but indeed, a travesty.

I made the decision to publish your email and this reply to you will also be published. I have conducted the Save Walsall’s Green Spaces campaign in full public view and tried to make information freely and readily available rather than being buried within pages of heavy tomes. Although I am not a paid and elected Councillor I have attempted to be open and frank with everyone and yes, to a certain degree accountable to those who have placed their trust in me in running the campaign. I feel very badly let down by the contents of your email and also by the Council, failing in its promises to keep me and the Campaign informed. In honesty I feel your conduct in this matter is unbecoming of an elected Councillor.

It has become clear whilst campaigning that people value a forum where they can obtain information and express opinions and ask questions about Walsall’s Green Spaces and so I shall continue what has been started albeit in a slightly different form. The point is Cllr Harris, we have a genuine love for Walsall’s Green Spaces. Many of us give up our time on a voluntary basis to work in them, to preserve the legacy for future generations and to promote their use. We do this freely and willingly. All that is expected in return is a little respect from the Council for whom we save thousands of pounds by doing what we do. We do not have to account to you. It is you that has to account to us.

Posted by Save Walsall's Green Spaces and Countryside Services at 11:03 am